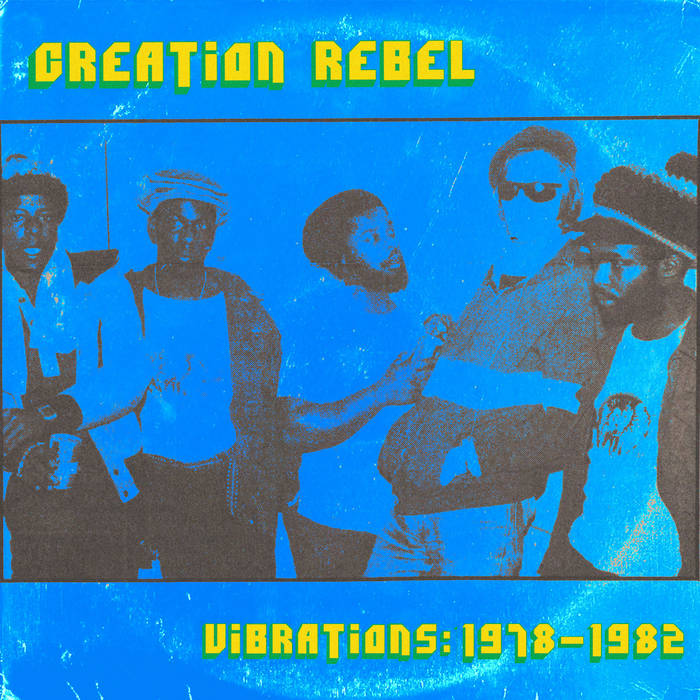 To celebrate the gold vinyl reissue of Creation Rebel’s Starship Africa and the band’s recent return to the live stage after a break of over 30 years, we’ve compiled this selection of highlights from their various On-U Sound releases, including key album tracks, discoplate tunes, and deep cuts.

Kicking off appropriately with a track from Creation Rebel’s debut album, the great Dub From Creation. The rhythm tracks had been recorded in Jamaica but overdubs were laid down at Gooseberry Studios in London. The album was Adrian Sherwood’s first ever production assignment and the more experienced engineer Dennis Bovell recalls the studio newcomer exhorting him to make it sound “madder” and add more and more effects!

Arguably the band’s masterpiece, and one of the most out-there dub records ever released, this is just one example of the cosmic weirdness embodied in the grooves of epic concept album Starship Africa. Using and abusing an old tape of rhythms recorded as backing tracks for another artist (the now forgotten DJ Superstar), Adrian, in conjunction with his then-business partner Chris Garland, played the tracks backwards, overdubbed drums on top of drums, distorted voices into unintelligible alien phone calls and generally ripped up the standard production rulebook in order to push the mixing board to the limit. The result is a deep and lasting work that fits alongside 70s kosmische music just as well as it beams down into a reggae set.

Released as a 10” as part of the original run of On-U Sound’s longrunning and popular ‘Disco Plate’ series of EPs containing exclusive material. “Independent Man” is the full-length version of a track that also appeared in cut-down form on the final Creation Rebel album, Lows & Highs, released on the Cherry Red label in the same year as the EP. A re-work of the Bob Andy tune “Unchained” (cut with Clement Dodd for Studio One), this version saw Creation Rebel bassist Lizard Logan taking to the mic to deliver a tale of sufferation that is sadly still all too relevant today. This extended take goes from the vocal into dubbed out coda in classic Jamaican discomix style.

The closing track on the prolific act’s third album on the pre-On-U Sound Hitrun label, the title refers to the melodica playing of Doctor Pablo aka Pete Stroud. Interestingly the back sleeve of the album features the first mention of a ‘dub syndicate’, a name which would become attached to a later (and arguably the most popular) On-U studio band, helmed by Creation Rebel contributor Lincoln “Style” Scott. Style was an astonishingly talented drummer who also laid down the beat for classic JA studio band the Roots Radics, well known for backing Gregory Issacs amongst many others. The other connection is that Dub Syndicate cut an album of irreverent version excursions with Doctor Pablo in 1984, North Of The River Thames, worth the price of admission for their astral dub take on the “Doctor Who” theme alone! Another interesting bit of trivia for dub crate diggers - Rebel Vibrations was engineered by Mark Lusardi, another significant name in the development of dub in the UK alongside Sherwood, Bovell and the Mad Professor. Mark worked with Public Image Limited, Greensleeves Records and Black Slate, and is the brother of glamour model Linda Lusardi!

Featuring almost military style snare rolls (a sound later explored to great effect by Jah Shaka amongst others), the title is perhaps a sly nod to Sherwood’s fondness for instrumental twang by the likes of Link Wray and Duane Eddy. Although this is another kind of rebel music entirely, far more focussed on heavy bass, there are definitely some parallels with late-50s rockabilly rumble in the liberal use of effects such as reverb and tremelo, and the ability to conjure up a sophisticated mental soundtrack using relatively primitive parts.

The roots of Creation Rebel go back to an outfit known as the Arabs, who backed the ‘voice of thunder’ Prince Far I and mutated into the first line-up of Creation Rebel when they came to the UK. Far I was an early mentor to Adrian Sherwood and they worked together extensively, setting up deals to licence JA tunes for UK release, organising the Roots Encounter tour, and the Prince lending his gravelly tones to a number of tunes by On-U collective Singers & Players. This track first saw release as a 7” on Far I’s own Cry Tuff label (referencing his original deejay moniker ‘King Cry Cry’), and the title track of the Dub From Creation album re-versions this same rhythm. Tragically Prince Far I was murdered in 1983, leaving behind a significant legacy of recorded work such as Psalms For I, Under Heavy Manners, and of course the classic Cry Tuff Dub Encounter series.

A rare Japanese bonus track included on an expanded CD reissue of the Psychotic Jonkanoo album, this track lays some playful boss reggae Liquidator-esque organ over a rhythm that also cropped up in different form on the Lows & Highs album as “A Reasoning”.

The flip side to their Independent Man disco plate, not to be confused with the well known Burning Spear track, this can be viewed as a kind of band theme tune, and features dual vocals from Lizard Logan and guitarist Crucial Tony. Also cut by Prince Far I as “Prodigal Son” on Singers & Players second album, Revenge Of The Underdog.

Our final pick from the band’s debut album, layering shimmering percussion and strange effects over a hypnotic locked bass groove. Original Creation Rebel drummer Eric “Fish” Clarke also cut a vocal version of this for his only solo album, Love That Grows And Grows, released in the same year as Dub From Creation. Fish has played drums on innumerable reggae recordings and is the older brother of roots legend Johnny Clarke.

Nothing if not prolific, Psychotic Jonkanoo was the sixth Creation Rebel album in three years (if you count their collaborative effort with On-U labelmates the New Age Steppers), Psychotic Jonkanoo was licensed to the post-punk oriented Glaswegian label Statik. Another solid set of killer dub, albeit less instrumentally inclined than their previous efforts and more focussed on militant-style conscious chants. Lizard Logan was aided on the vocal front by harmonies from other group members, plus the occasional guest such as John Lydon with a rare instance of him providing backing vocals on “Mother Don’t Cry”.

Appearing in edited form on the band’s rare second album, Close Encounters Of The Third World (vinyl copies go for upwards of £150 in decent nick!), this great Crucial Tony composition is presented here in it’s full 12” version. Copies of any record on the pre-On-U Sound Adrian Sherwood-helmed Hitrun label are also highly sought after, and include killer sides by the likes of Naggo Morris, Carol Kalphat, U Black and Prince Hammer.

A version of “Mountain Melody” from the Rebel Vibrations album, this appeared on an Adrian Sherwood compiled collection of his early dub productions. The same rhythm was also used to great effect on the “Acid Tabla” track he produced for Mancunian outernational sound explorers Suns Of Arqa on their debut Revenge Of The Mozabites album.

Another selection from their third album, which came housed resplendent in a sleeve illustrated by Tony Nero, also involved in Count Shelly’s Third World label. This track is primarily a showcase for the keyboard work of Clifton “Bigga” Morrison, weaving his deft piano and synth parts in and out of the East Of The River Nile melodica moves of Doctor Pablo.

Originally part of the Threat From Creation LP jointly credited to Creation Rebel and New Age Steppers, this track has been described by On-U authority Steve Barker as “the most psyched-out On-U dub of all time”, and who are we to argue?! In 2015 we asked DJ, designer and fan of the label Trevor Jackson to curate his own personal selection of On-U favoruites and deep cuts. A pretty definitive triple LP overview of the most damaged and deranged tunes from the missing channel, this of course had to be included as a prime example of a Science Fiction Dancehall Classic.

We had to end on a tune from the album this collection has been put together to celebrate. Beautifully blending delayed melody lines, odd bell-like effects, and an exquisite use of space, both in terms of utilising an absence of sound as a device in the arrangement, and conjuring up mental images of interstellar travel. As man like Steve Barker has also rightly opined, Starship Africa remains “a magnet for Headz which retains its stoned power today”.

Originally the backing group for the late reggae great Prince Far-I, Creation Rebel worked with Adrian Sherwood from 1978 - 1982, recording some of the best reggae dub music this side of Lee Perry during the early English punk era. Brilliant musicians such as Eskimo Fox, Bigga Morrison, Style Scott and Crucial Tony made music that is languorous, funky, spacey, and totally intoxicating. ... more

Bandcamp Daily  your guide to the world of Bandcamp